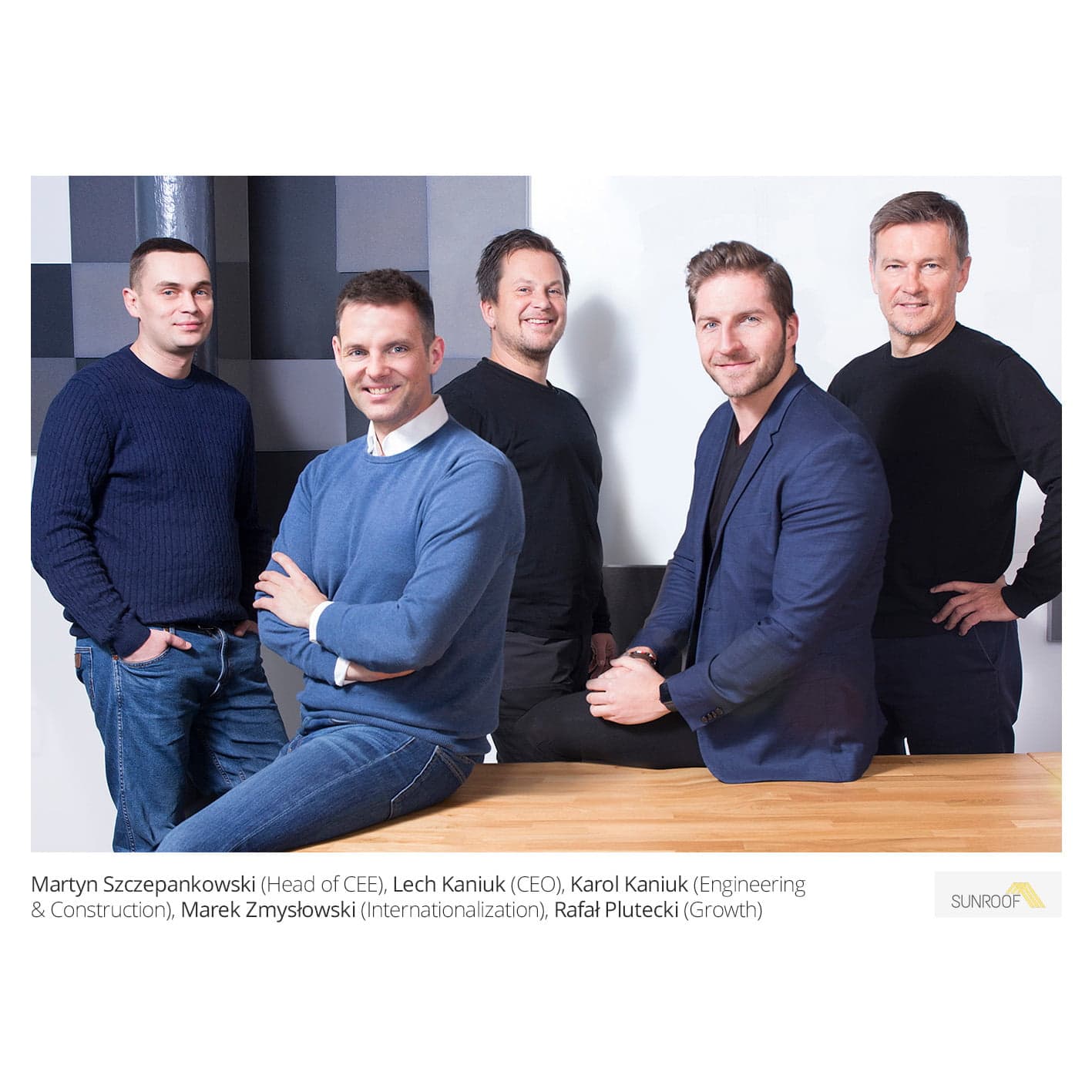 We talked with Lech Kaniuk, CEO of SunRoof.

How would you describe your company in an elevator pitch?
Software enabled solar power for everyone.

IDEA
SunRoof launched in 2013 in Sweden with a goal to create a beautiful, 2-in-1 smart roof that produces power from the Sun, replacing the need for installing solar panels on top of a classic roof.

PROOF OF CONCEPT
The company has successfully developed a patent pending technology, obtained safety certificates, and gained experience installing more than 150 roofs in Sweden, Poland. SunRoof is currently the most efficient solution (kW/m2) and has the lowest carbon footprint in the world in its class.

In 2019 SunRoof added new cofounders experienced in global, rapid expansion to accelerate its mission of transitioning the world into sustainable energy, enabled by a blend of software and hardware. In 12 months the company expanded from Sweden to Poland and Germany, scaling sales by 400% YoY.

What are you the best at?
Startups have a big role in driving change leading to sustainable development and fighting climate change. There are so many innovations needed to make a full transition to renewable energy and we need as many challengers as possible.

I also think that people, like us, not coming from the energy sector in the first place have a big role to play too. We have grand visions,  audacious goals and at the same time don’t see all the barriers and limitations. We’ll throw ourselves on the task and figure out a solution on the go. And as momentum builds up, we’ll push through.

How did you find your first customers?
Before Karol Kaniuk started selling solar roofs, he installed a photovoltaic system in his home to gain hands-on experience.

The first solar roof attracted the attention of neighbors and convinced them to expand this solar innovation.

While the first years of the startup were spent mostly on building and testing its proprietary technology, SunRoof gained momentum in late 2018 after joining of Lech Kaniuk, who then brought on board Marek Zmyslowski and Rafal Plutecki in 2019.

Thanks to the team enforcements, SunRoof recorded a 500% YoY growth. As of today, the company has built more than 150 roofs in Sweden, Norway, and Poland and keeps setting new trends for smart roof solutions.

What are your customers saying about your product?
Our clients get a whole ecosystem of smart solar solutions that will make their sustainable lifestyle, exciting and comfortable and at the same time.

The solar roof becomes the starting point and the center of energy independence of our clients.

Our goal is to cut our current CO2 footprint in half.

Great feeling to fill my electric car up with my own produced electricity. It is much cheaper to use solar panels as roof tiles since you can sell the electricity, and a bonus is that it looks great! Since the roof is now lighter the house is much more stable which is easily noticeable since we live at a very windy location.

A Client testimonial about SunRoof.

What are your proud achievements so far?
The team. We have managed to bring on board top entrepreneurs, managers and specialists. We have already from the start set a very high standard for whom we hire and are putting a lot of effort into the recruitment process. Our ambition is to become a Unicorn before year 2030 and we need great people to achieve this.

What is the next big thing in your industry?
First thing is a true decentralization of energy. We are becoming a virtual power plant and believe strongly that our customers with their SunRoofs (distributed energy resource) will become a very important part of the future energy infrastructure. Much more important than people think. This is because solar power will grow, but we will soon see a reluctance to cover massive amounts of land with solar arrays, when roofs are still not fully utilized. We believe that we are able to power most of the need with a roof and windows. That’s another product we are about to introduce, a transparent electricity generating window.

We have achieved a milestone where a SunRoof can be cheaper than building a roof first and then put solar on top of it. This is important not only from an aesthetic point of view, but also to reduce materials used in contraction, thus reducing CO2. We will see more BIPV companies reaching this over the years and that will make building integrated solutions more mainstream and not a premium/design product.

Last, but not least, we see advanced materials like perovskite and quantum dots adding new ways to generate electricity and also possibilities to enhance traditional PV to increase the efficiency. This will be especially important if we want to have more rooftop generating power instead of acres of land converted with PV.

What are your plans for next 6-12 months?
Show we can grow 10x in current markets we are in, launch Italy and Spain and initiate our virtual power plant in Sweden and Poland.

TRADE WITH AFRICA – KEY TAKEAWAYS FROM THE GTR AFRICA 2020 »